Q, The Cabal, and The Restoration of Freedom to The World

NOTE: The upper part of this list is couched in terms of advice to Evangelical Christians. However, anyone and everyone can benefit from these videos, podcasts, articles and notes. These items are given in what is believed to be a helpful order, though consuming them in order is not essential. I do feel the first video should be watched before anything else as that sets the context for everything.

(1) Review how you would explain the gospel to a person who comes to you with a deeply troubled soul. (2) Start understanding the huge crisis that is going to shake the world at it's foundations one week in the very near future. This will be an ongoing educational process for you, yea, for all of us. Begin with this short but VERY important 13 min. video. After months and hundreds of hours of my own study, I now feel that this is the ONE concise video that needs to be seen by EVERY PERSON in the WORLD!.

Or watch the same video on Youtube: www.youtube.com/watch?v=ErLjQ5bLCB8
(Oops. Youtube has deleted the video as well as the channel. More wicked censorship by the criminals at Youtube.)
(3) Most of your doubts and questions raised as a result of the above video will be answered in this amazing 10-part documentary. By the end of it, you will learn among many other things WHY your loving shoulders are going to be greatly needed by MILLIONS of hurting people!

THE END OF THE WORLD AS WE KNOW IT... THE FALL OF THE CABAL

The documentary "The end of the world as we know it ... The fall of the Cabal ..." is the result of 2 years of intensive research by Janet Ossebaard of The Netherlands. Known for her research of frontier sciences (crop circles, UFO disclosure and their relationship with ancient civilizations), after 25 years of studying these topics, her attention was suddenly drawn to the so-called Q phenomenon that emerged in late 2017.

This was another mystery that left cryptic messages on internet bulletin boards about international politics, crime and corruption, and the promise of a beautiful new world: the Plan to Save the World. Triggered by a new enigma, Janet decided to join the so-called Q-Anons (anonymous people worldwide dedicated to deciphering the Q messages). She fell from one surprise to the another. With her left-wing background, she was anti-Trump, but thanks to her own research (going beyond the press coverage, known as the MSM--Main Stream Media), she discovered a hidden world of conspiracies at the highest political level. In her research past, Janet had access to many resources and whistleblowers. Little by little she unraveled a monster plan to dominate and subdue the world (and its people). She discovered Trump's plan to counter this. And she understood that a small group is working to support him in this, the mysterious Q.

Who is Q? What is Trump's role? What is the role of the MSM? What was the real Russian plot? How is it possible that Q predicts things from the future, correct to the decimal point, as predicted in the Q clock and Q posts? Who are the real rulers of the world, beyond political leaders, kings and queens? What role do the banks play? The Vatican? Brussels? What will their downfall be? What is the role of the people? What are the roles for you and for me? How can we experience the enormous transformation that we are now going through en masse, in full consciousness? How can we fully experience the Great Awakening and with inner strength and trust?

What sounds like a collection of boring political subjects has been molded into a breathtaking, nearly three-hour long documentary with which Janet is currently touring the country (her native Netherlands). For almost three hours, you won't hear a pin drop and people sit on the edge of their seats, listening to Janet's voice (in Dutch) and very appropriate music in the background, watching an abundance of images that support all of the findings.

The film receives standing ovations and turns many a world view upside down. The content is intense, but at the same time very hopeful. It brings the viewer into his/her strength and prepares for what is to come.

If you are interested in well-founded facts (each piece of film contains at least three reliable sources) about the end of the world as we know it and the birth of a new world based on love, abundance, compassion and peace, the Great Awakening--what all the old source texts tell about, come to one of Janet's presentations or buy her documentary on DVD.

The investigation is ongoing, and Janet is now working on a follow-up documentary.

THE END OF THE WORLD AS WE KNOW IT... THE FALL OF THE CABAL (Click image)

Note the part about "who are receiving and interpreting the communications and sharing". That's called "decoding" the Q-drops and takes a great deal of time, effort and practice to do and learn how to do. Most of us will never need to do that. Those people are continually putting out their results via social media etc, some of which you'll see further down the list. No, decoding is not needed in order for you to be prepared for the great "fields white unto harvest" that will be sprouting up very soon! (6) Read the description of a book on Amazon, "QAnon: An Invitation to The Great Awakening". Buying the book not needed; just read the description. (Click the cover below.) 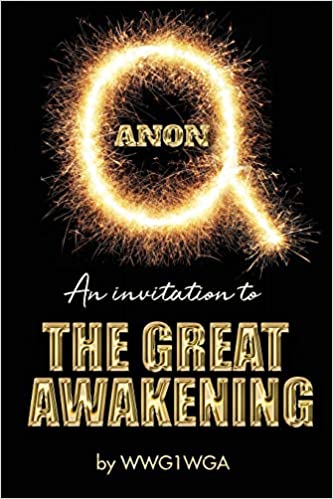 Oops, I just discovered (2/2/2021) that Amazon has banned this book. However, it can still be obtained from the authors' website! Check it out! 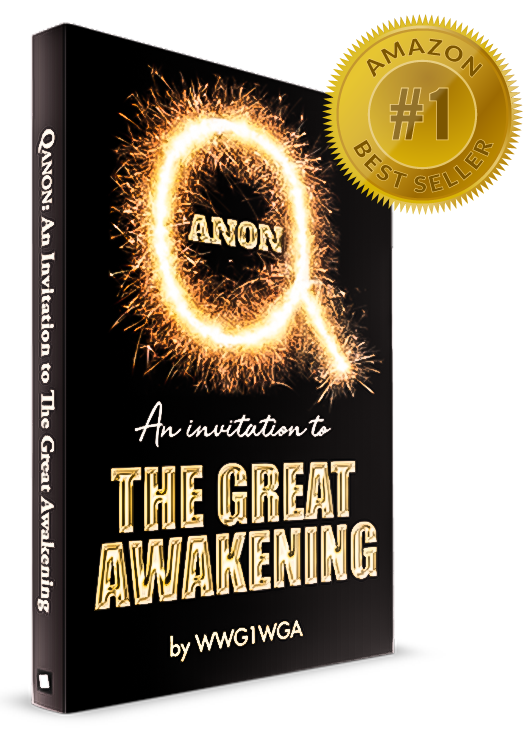 (7) Consider following one or more high-level Q-Anons that are strong Christians and who make godly prayers at the end of each of their intel-revealing videos. Each has a website, Youtube and Bitchute channels, and other means of communicating.

Mid Oct. 2020 both these Anons' and many others' Youtube channels were taken down in a massive attack by the criminals running Youtube. Whatever backup channels they have are accessible via their websites. There are probably other Christians Anons, most notably PrayingMedic.

If one is smart enough and with lots of free time, one could learn to decode the direct intel Drops from Q. But I don't advocate that at this point in time. But many of the Drops throughout the history of Q (which started Oct 28, 2017 at 2:33pm EST) include scriptures or requests for prayer or THANKS for the prayers of patriots praying for POTUS. If you wish to look over Q's posts, here is one of the mirror sites: qanon.pub. It wakes up with the most recent at the top. But you can reverse the order, and there are a few cryptic tools that one can play with. The site is not intended to be user friendly. (8) If you do just steps 1-3, you'll be doing well. Simply share items 2 and 3 with whoever God lays on your heart. And pray often for President Trump and the Q-Team. (Q often asked for prayer for them all!) (9) Watch "Adrenochrome: Mockery and Reality" (45 min.) featuring Gene "Decode", Charlie Freak and Jim Caviezel. This has everything everyone needs to know about adrenochrome: what it is, how it's harvested and (especially) by WHOM! Share it everywhere you can safely do so! (Don't try Youtube as they will censor it!)
(10) UNDERGROUND TORTURE CHAMBERS. This rare report documents the vast networks of underground tunnels throughout the earth and how the Trump administration has been attempting to rescue the thousands of tortured children being kept down there, many dead already, and some having lived there for several generations. You might not want to share this, but at least be aware of the horrors and the glorious responses of our great President and military. (NOTE: Your browser MAY report that the link is "unsafe", but I personally believe it's safe to visit.)
Trump Heads Rescue of Thousands of Tortured Children from Underground Tunnels (11) This text about and by Liz Crokin is very uplifting and so is the 8 min. video after it. Please DO share this widely and especially with those who still call Trump a racist and sex pervert. "Liz Crokin, a top-notch MSM journalist, wrote this on or close to July 22, 2020. This info about Donald Trump is the MOST SHOCKING I'VE EVER HEARD! This will blow your mind! I don't care if you're Dem, Repub or neverTrump. I'm also sharing a short video of hers that just might make you CRY! I know it did ME by its end!" ---Tom Cook

"For those of you confused as to why President Trump wished Ghislaine Maxwell well, here's some insight. President Trump is constantly trolling the Deep State and yes he often uses sarcasm. The Deep State uses comms and code words all the time. Trump has a history of using their codes and throwing them in their faces. Q posted that wishing someone well is the Deep State's comm for death threat. As I have extensively reported, the only reason Jeffrey Epstein and Maxwell were arrested is because of President Trump and his DOJ. Furthermore, Trump has to remain neutral about these cases for optics. If he doesn't, they'll call him a tyrant and accuse him of weaponizing his DOJ for political reasons during an election year. Trump plays 5D chess and is always 1,000 steps ahead. We can't always make sense of his moves but I can assure you everything he says and does is strategic. He's been working as a double agent to take down the Satanic Pedophile Cabal long before he became President. He has access to the highest level of classified information and he's working with the best military intelligence team that's ever existed. Also, his favorite book is the Art of War and he constantly uses Sun Tzu tactics to combat the enemy. When Trump says or does something that doesn't make sense, do not react out of emotion. There's a lot going on behind-the-scenes and when the dust settles everything will make sense!" ---Liz Crokin

COVID911 - Insurgency
Learn the REAL reason(s) the Covid19 virus was released upon the world! (Only 10 min.)
Charlie Freak's info and insights

Charlie is into some false new age ideas (most new age ideas are incorrect), but they do not affect the DATA he presents, which is EXQUISITE! Therefore I enthusiasticly share the valuable information he has to offer!

Special note concerning GVP #161: If you listen, you'll hear Charlie refer several times to IMAGES that they would later make available of Trump's travels in 2017-2018. These pictures were synchronized to the last 96 minutes of the show and put in a video here:

The Q Team's Takedown of the Cabal from A to Z - hosted at Rumble.
(AKA "The Timeline" as named by the great layman patriot Felipe Alexander who was the one who added pictures to the audio track to make this video.)